The Stubnerkogel, already well known as a ski mountain, has also grown into a scenic hotspot in recent years. With a 140 m-long suspension footbridge and the “Glocknerblick” viewing platform, it is now home to two attractions that treat visitors to magical scenery. The “Rock Path”, with striking lookout points of its own, adds the perfect finishing touches to this mountain experience.

The 140 meters-long suspension footbridge on the Stubnerkogel in Bad Gastein simultaneously breaks two records: It is the first suspension bridge at 2300 meters, and it can be walked across all year round.

It begins right next to the restaurant in the upper terminal of the Stubnerkogel mountain lift and leads you on a 28 m walk above the abyss to the Stubnerkogel transmitter station. You definitely need a head for heights if you decide to step out onto this swaying construction, since the balustrades and floor are both transparent.

Located across from the footbridge is yet another attraction – the “Glocknerblick” viewing platform. A fantastic 360° panorama as well as the sight of Austria’s highest mountain, the Grossglockner, are certain to set the pulses of all true mountain lovers racing with pure joy.

It begins around 400 meters below the actual lift terminal at 2,217 meters above sea level. You can count on no shortage of adrenaline rushes along the way, since this trail, constructed in parts out of steel, takes you right against the rock face, treating you to breathtaking views, including through the grating beneath your feet.

At the Stubnerkogel mountain terminal, the 300 m² Fun Center promises all kinds of play and entertainment.

Free admission to the FUN CENTER

… an alpine island for your wellbeing

Enjoy their beauty and relaxation treatments with Gastein’s mountain world before your eyes. Felsentherme thermal spring spa resort in Salzburger Land offers you a wide variety of exclusive wellness and beauty amenities.

Brush away the stresses of daily life and immerse yourself in the wellness world of the Felsentherme in Salzburger Land. Gastein’s Felsentherme shines with one particular wellness “high”-light: Located on the highest point of the Felsentherme, the sun deck, is the wellness area, with its overwhelming views of Gastein’s mountains. Health and never-ending views at 1100 meters above sea level. Send your eyes on their own personal journey through the alpine world of Gastein, while you enjoy the pampering of a lifetime .

Aside from being famous for its past as a World Championship piste for alpine ski racers, the Graukogel is renowned above all for its wealth of pine trees. Many of these trees are as much as 300 years old. The harmonious and relaxing effects of pine are well known.

Pine Path on the Graukogel in Gastein

Experience pine with all your senses

The Graukogel is famous for its especially beautiful and ancient pine trees, many of them as much as 250-300 years old. Declared “Tree of the Year” in 2011, a ca. 45-minute walk right next to the mountain station of the Graukogel lift is highly recommended. Pause at idyllic locations, take advantage of unique seating made of pine for a brief break, or check out our big outdoor pine bed! Incidentally, pine also has the effect of lowering your heart rate. In turn, this promotes relaxation, not least because pine truly affects all of your senses.

Bad Gastein Waterfall is the emblem of Bad Gastein, located in the centre of town and plunging a total of 341 m in three tiers to the valley bottom. Along the Grabenbäckersteig and Wasserfallweg paths, you can view the waterfall from different perspectives. 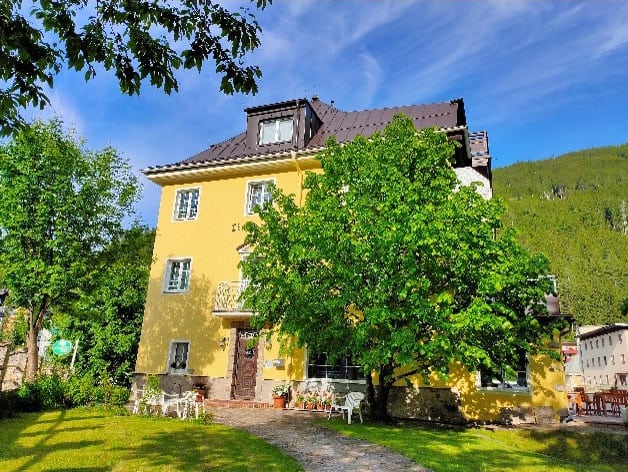 Book your unforgettable holiday in the mountains at the Boutiquehotel Lindenhof, in Bad Gastein now.