The train from Salzburg, Austria to Bad Gastein is just shy of 90 minutes. The book I brought for company sits idly on my lap, and I look out my smudged train window, transfixed by the landscape. The swift journey into the heart of Hohe Tauern National Park serves as a primer for the Alpine wonders to come. I see children learning to ski on local hills and climbing lightly snow-dusted peaks topped by the occasional castle. As we pull along the side of steep mountains through a wide valley, I hear “Bad Gastein” announced and pop up out of my seat in surprise that we’re already here.

Families carry off skis and duffles, most of them speaking German, and we all shuffle through the Alps’ oldest train station, opened by Emperor Franz Joseph in 1905. We’re the latest guests to Bad Gastein, which rose in prominence first as a gold rush town in the 16th-century, and next as a spa town with healing powers that beckoned emperors and empresses in the 19th-century. Empress Elisabeth (among other royals) journeyed here for curative baths, restorative hikes and time to fill her diary with poetry.
One of Bad Gastein’s old dames

The town’s golden age has since passed, but its longstanding legacy is no less visible. Enchanting Belle Epoque hotels line streets cut into a steep mountainside that gives way to a 200-meter-long whooshing waterfall. The stunning grand dames of Bad Gastein have undeniably gorgeous bones but most are uninhabited, bringing an eerie quiet to the fairy tale setting. The most magnificent, the 11-story Grand de l’Europe Hotel, strikes the same note as Wes Anderson’s Grand Budapest Hotel.

With a high Alpine landscape, world-class skiing, and mineral-rich waters once referred to as the fountain of youth, this eclectic but almost-forgotten town teeters on the brink of rebirth. That’s because, over the last decade, creatives have made Bad Gastein their home, vowing to reawaken and renew its spirit.

This town is not for everyone, though. Those seeking five-star amenities in a ski-in/ski-out resort and designer boutiques best travel elsewhere. But if Marfa and Hudson were on your radar before they reached everyone else’s bucket list—and if you’re yearning to discover a place that feels yet-to-be-discovered—read on. Then book a flight to Munich or Salzburg before hopping on a train to Bad Gastein.
Under the arches in the center of town

Under the arches in the center of town
Photo: Courtesy of Elizabeth Wellington

Because Bad Gastein is built into a gorge, it unfolds in tiered layers that make the average map tricky to follow. You’ll have to navigate up and down as well as left and right. Meander along the streets that lead deeper down into the valley from the suburban center (with its train station and ski lifts) to the rushing waterfall at the center of town. There’s a peaceful hum to such a powerful stream that’s undeniably soothing. From there, stroll out on Kaiser-Wilhelm-Promenade to take in the Belle Époque jewels from the town’s heyday.

Although a few hotels you’ll pass include their own in-house spas, you’ll want to visit Felsentherme spa’s sprawling, brutalist structure—complete with heated indoor and outdoor thermal baths. More municipal than luxury, it’s the favored stomping grounds for locals. Mineral-rich thermal water from 18 springs at the base of Bad Gastein pour into the baths. Naturally infused with low levels of radon, these healing springs continue to attract visitors who want to boost their immune systems or manage inflammatory illnesses. (Do consider that the Environmental Protection Agency (EPA) suggests that radon exposure at any level is a health hazard, even given the longstanding, multicultural history of this kind of alternative treatment.)
The sun shines over skiers at Sportgastein 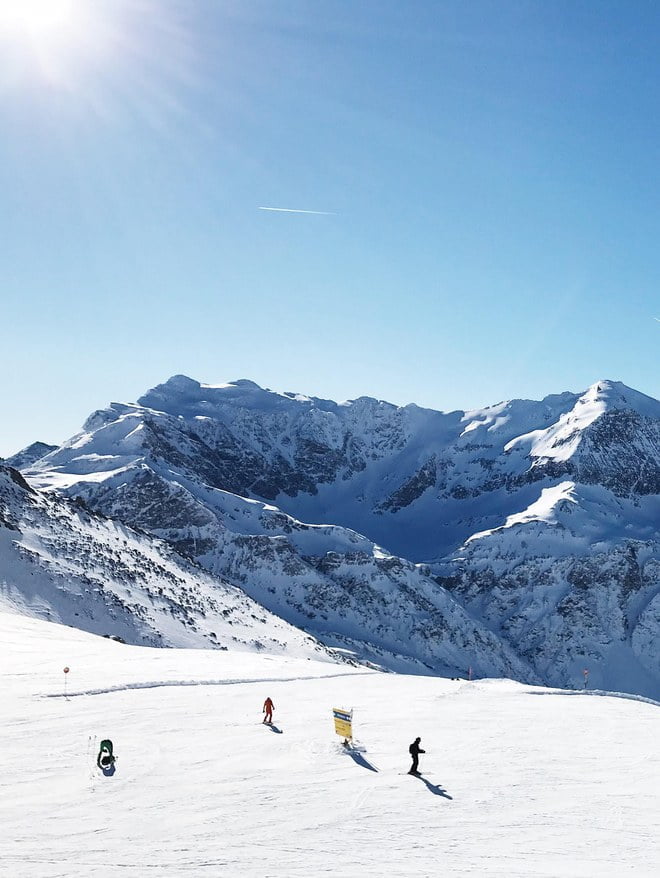 The sun shines over skiers at Sportgastein
Photo: Courtesy of Elizabeth Wellington

Bad Gastein’s other natural wonder—its stunning scenery—is the greatest joy of any visit. Enjoy 136 miles of downhill ski runs across four different areas: Stubnerkogel-Angertal-Schlossalm, Sportgastein, Graukogel and Dorfgastein-Großarl. Given the high altitude and steep face of the mountains, there are few long and easy runs, making the resort ideal for intermediates. There’s a striking benefit to steeper slopes: you almost always benefit from spectacular views.
Overlooking the gondola at Sportgastein 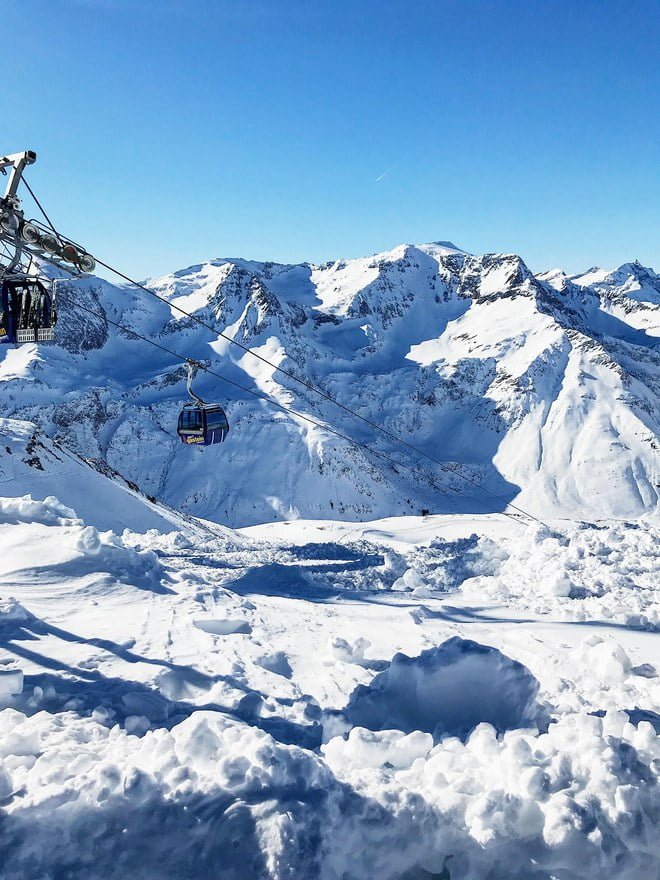 Overlooking the gondola at Sportgastein
Photo: Courtesy of Elizabeth Wellington

That’s especially the case in Sportgastein, which locals refer to as “Tiny Tibet” because of its breathtaking scenery. A couple of miles outside of town, this high valley is an absolute marvel that feels both sequestered from civilization and deeply reflective of the beauty of the Alps. Kreuzkogel, its peak, climbs to 2,686 meters and is topped with a beloved glass and aluminum geodesic dome designed by architect Gerhard Garstenauer.

Even if you’re not a downhill or cross-country skier, it’s worth visiting Sportgastein for a long walk or snowshoe through sparkling fields surrounded by mountains. You can get there with a free bus that picks you up outside Bad Gastein train station and drops you off at the lift. Right in town, you can also take the gondola up the mountain to Stubnerkogel, Europe’s highest suspension bridge; at 459 feet long, it sways in the wind. Those of us who would rather stay more firmly rooted on the ground can, instead, indulge instead in a beautiful sleigh ride through the valley.

You can stay in our hotel